You can create continuous integration and continuous deployment (CI/CD) workflows with DigitalOcean services using GitHub Actions. In this tutorial, you learn how to deploy a simple Python application to a DigitalOcean Kubernetes cluster whenever you commit a change to your GitHub repository.

The workflow consists of the following steps:

Note
Following the steps below may result in charges for the use of DigitalOcean resources. Delete the resources to avoid being billed for additional resources.

Before you can create a CI/CD workflow using DigitalOcean services, do the following:

We provide a sample repository that has a simple Python app that generates a “hello world” message and other files used in the tutorial. You can clone the repository using the following command:

The file named workflow.yaml in the sample GitHub repository defines the triggers, jobs and steps for the workflow.

You can create your own workflow file in your GitHub repository. Click Actions and choose one of the provided templates. To create a custom workflow, click set up a workflow yourself.

STEP 3: Configuring Actions in the Workflow

The workflow.yml file configures the following actions for the workflow:

For more information on the syntax to write the actions, see Workflow syntax for GitHub Actions.

The first section of the workflow.yml file specifies the conditions under which the workflow gets triggered. In this example, the workflow is triggered on a push to the main branch of the repository if specific files or folders are changed.

The on keyword specifies the name of the GitHub event which triggers the workflow, which is push in this case. We specify the configuration for the push event using the following keywords:

A workflow run is made up of one or more jobs that can run sequentially or in parallel. It specifies the type of machine where the job runs and several steps to represent a sequence of tasks that will be executed as part of the job. We specify these using the runs-on and steps keywords in a single build job.

A step is an individual task that can run commands in a job. A step has a uses or a run keyword to run an action or a shell command, and optionally a name keyword. The build job in this example does the following:

$GITHUB_WORKSPACE is one of the environment variables in the Action’s runtime environment. This directory contains a copy of the repository that triggered the workflow. Changes made here persist from one step to the next.

doctl is now available in the virtual environment and can be used directly in the following steps.

This example builds the Docker image with the $GITHUB_SHA tag, which is another environment variable in the Action’s runtime environment. Its value is the SHA of the commit that triggered the workflow. REGISTRY_NAME is the name of your DigitalOcean Container Registry you added to the GitHub repository as a secret previously. python-example is the name of the repository in your container registry.

The deployment.yml file in the sample repository only has a placeholder for the Docker image, IMAGE, to deploy. Before we can deploy the image to the DigitalOcean Kubernetes cluster, we need to update it to point to the image pushed to your container registry. To do this, we use the standard UNIX tools and sed to update the contents of the deployment file.

Go to the Actions tab in your GitHub repository, click on a workflow run and click Re-run jobs. Each step runs in the order specified in the workflow. Alternatively, you can edit any file in your repository and commit the changes to the repository. This commit triggers the workflow.

You can monitor the workflow run by clicking All workflows and selecting the name of the workflow. Under Jobs, click build.

Click to expand a step and view the results of that step. 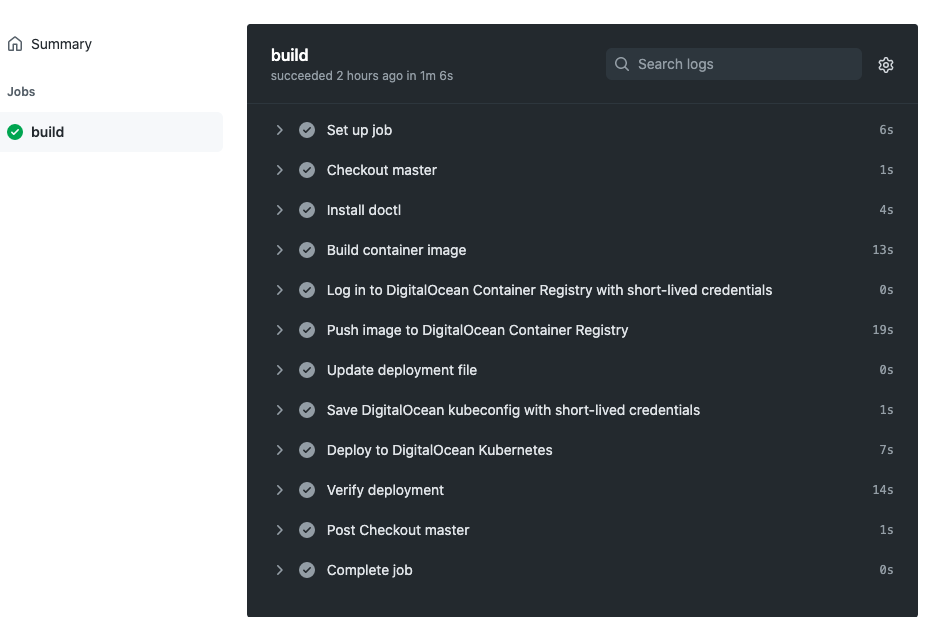 Once everything is green, your application is live at http://<external-endpoint>, where external-endpoint is the External Endpoint of the service that you can obtain from the Kubernetes dashboard of your cluster.

Any time you make a change to your app and push a commit to the main branch of your GitHub repository, the GitHub Actions workflow triggers and the changes get re-deployed.

When you no longer need the resources created in this tutorial, you can delete the DOKS cluster and container registry.

In this tutorial, you integrated a DigitalOcean Container Registry with a DigitalOcean Kubernetes cluster and set up a CI/CD workflow using GitHub Actions to deploy a simple Python application. You can create your own Dockerfile to build the image for your application and use the same workflow to deploy other applications. You completed the following prerequisites for the tutorial:

You can expose your deployment to the world by adding a load balancer as described in Add Load Balancers.